Major Craft are a Japanese brand famed with making some of the finest yet value for money lure rods on the Japanese Market. They are widely available in the UK from most tackle shops that specialise in Lure fishing.

Modern lure rods are a world away from the original british spinning rods and japan has lead the way for the slimmest, lightest blanks and a true inspiration for the UK market that is dominated by supremely light fast action spinning rods, the majority of which are Japanese.

My first taste of these light Japanese rods was with a Major Craft Solpara. A stunning rod for under £100, a bit of a steal if you ask me…

In the back of my head though I had always fancied a skyroad, but I had the Solpara and it suited me well. It was light, the action suited my casting and the butt handle felt the right kind of length. The temptation was avoided even with most the guys I fish with back home using and praising them.

All that changed though when I headed to Kerry, Ireland last year on a co-guided trip with Henry Gilbey and John Quinlan. Henry had bought with him 2 Major Craft Skyroads, the 8’6 and the 9’ for us, the clients to use if we wished. As you’d expect I couldn’t resist getting my hands on them to give a thrashing it’s great that Henry can provide rods of such quality high quality for customers on the trip to use! (and you can see yourself putting a nice bend in them once the camera comes out)

The first I tried was the 8’6, this length has always been my sweet spot. Not too long, not too short. A fairly fast action that loads up very quickly but there’s no sweet spot to have to find, it just wants to be cast and it’s easy. First session out with it was some topwater fishing for Bass in a shallow rocky bay, this rod just suits topwater lures down to a tee, the lure responded to every little twitch “walking the dog” instantly due to the tips fast recovery, it’s a wand that makes animating your lures truly magical. I then used it the following day on a morning Bass fishing where once again Bass were happy to take lure off the top resulting in 3 fish landed on the infamous IMA Salt Skimmer, this 8’6 really is a joy for surface fishing, it feels great in the hand very light, quality fittings, comfortable handle and a fast action that really punches lure out with ease.

What an afternoon we had with easily over hundred Pollock caught. In the shallow water (for pollocking at least) the fish didn’t blow their swim bladders as is often the case when fishing for pollock over wrecks and offshore reefs, and all fish were easily returned especially with the barbless hooks and the sport they provided was far superior to that of standard “Boat Fishing for Pollock” with the fish not giving up the ghost easily and following up to take the lures within sight just under the surface.

It was the 9ft that I really connected with though and although I originally thought the 8’6 would be the rod for me, the 9ft was just that little bit more perfect (to me). It has a slightly softer feeling tip that gives that extra feel with soft plastics, both weightless and jig heads, with it being extremely nice for the touch and feel of bouncing soft plastics. To me casting felt that bit better with this 9ft and the handle length everything felt right. After 2 days fishing with it I had one on order from Cian at Absolute Fishing ready for fishing with back home.

As with all carbon rods though there is every possibility of getting a flaw in the carbon and it snapping. Unfortunately this is what happened to me first session out with the new rod. I was casting a 4” TT Shad rigged on a 3g weedless hook (total of 18g i believe) and the rod snapped clean above the second eye from the tip. This was replaced free of charge with zero hassle, and it must’ve just been a dodgy blank that slipped quality control. I have before snapped rods due to my own error, tip tangles, over loading and through transport but they have all spliced as such, whereas this was a clean snap and only a few casts into the session. 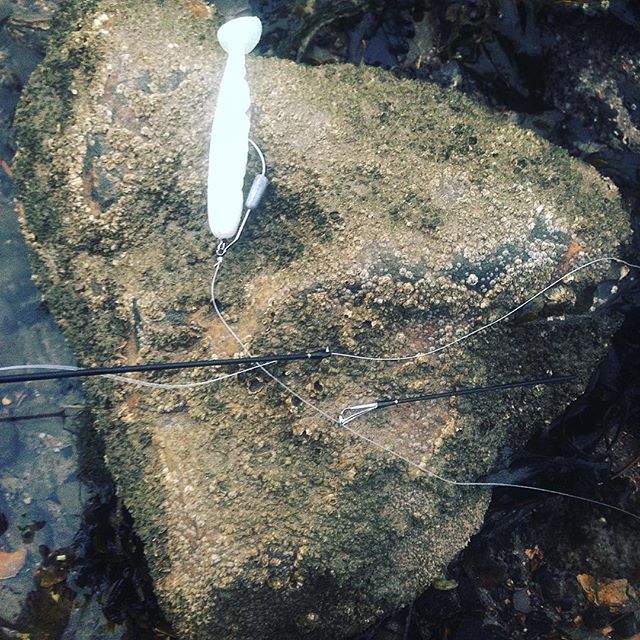 Since this replacement though, I have had no issues at all with the rod and it is still an absolute joy to fish with. It’s had plenty of use and landed enough fish for any faults since to have been found, so feel confident saying there is no fault in the model itself, just that I got unlucky, but there could well be a few going round that were from this same dodgy batch I had. Luckily it was replaced so smoothly and no issues have come since. It can happen with all carbon rods and no grudges held.

If you want to get a taste of the modern lure rods and are looking for upmost quality in terms of fittings, blank and weight then you really won’t go wrong with the Skyroad with the length depending on your personal preference. There’s even a 9’6 which is pretty tempting!